Founder and President and Chairman of the Board 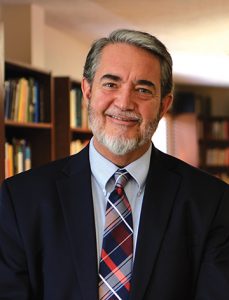 Dr. Scott Hahn is the Fr. Michael Scanlan Professor of Biblical Theology and the New Evangelization at the Franciscan University of Steubenville, where he has taught since 1990. He is the Founder and President of the St. Paul Center, an apostolate dedicated to teaching Catholics to read Scripture from the heart of the Church.

The author (or editor) of over forty popular and academic books, Dr. Hahn’s works include best-selling titles Rome Sweet Home, The Lamb’s Supper, and Hail Holy Queen. His most recent titles include The Creed and The Fourth Cup.  He is the editor of the academic journal Letter & Spirit: A Journal of Catholic Biblical Theology.

Dr. Hahn graduated from Grove City College in 1979 with his BA in Theology, Philosophy and Economics. He received his M.Div. from Gordon-Conwell Theological Seminary in 1982 and his Ph.D. in Theology from Marquette University in 1995. He was ordained in 1982 at Trinity Presbyterian Church (Fairfax, VA). He entered the Catholic Church at the Easter Vigil, 1986.

Dr. Hahn has been married to Kimberly for forty years, and together they have six children and eighteen grandchildren. Two of their sons are currently in priestly formation with the Diocese of Steubenville.

Over the last three decades, Dr. Hahn has delivered thousands of popular talks and academic lectures, nationally and internationally, on a wide range of topics related to Scripture, Theology, and the Catholic faith.

To invite Dr. Hahn to speak at your parish or see his speaking schedule visit ScottHahn.com.